Several months ago during a Q & A session at the Greater Orlando Area Meeting Planner’s International monthly meeting, I shared my thoughts that there really was no way to keep one social media private and utilize the others for business based on the speed at which social media was growing.  This revelation strongly differed with what I believed just short of a year prior, when I heard Murray Izenwasser a social media strategist with Biztegra speak for the SITE Florida in Orlando.  I remember actually arguing the point with him and saying that I was keeping my Facebook just for my personal use.

Fast forward to today, in the news I hear that a term called “shoulder surfing” has become rather prevalent during the hiring practices.  I think I’ve seen half a dozen interviews on the news where candidates are talking about being asked to login to their Facebook accounts so that the hiring manager can see what’s on their timeline.

Facebook is screaming that their privacy policy protects its users.  Their official statement about shoulder surfing says, “This practice undermines the privacy expectations and the security of both the user and the user’s friends…As a user; you shouldn’t be forced to share your private information and communications just to get a job.”

As a recruiter, I must confess to reviewing candidates Facebook profiles along with their presence on a number of other social media channels.  In fact, I often use Facebook as a way to reach potential candidates through a channel that most people view as private.  I look at it as calling someone at home versus calling them at work.

Last year, “the Federal Trade Commission gave their stamp of approval to a background check company that screens job applicants based on their Internet photos and postings”, according to an article on Forbes.com.  This stamp was not the same as a potential employer asking you for your password as part of the screening or hiring process.  It basically said if it’s in public domain we are going to look at it.

I share this information with you for three reasons:

1) Reminding you that social media is a good thing; it could help me find you for an opportunity of a lifetime.  Use it wisely.

2) Update your privacy settings on a regular basis to ensure that what you want to remain private is private.

3) Voting in an election isn’t the only time to stand up and be heard.  Contact your legislator and ensure that you get to continue to make a choice as to whether or not to share your access.

I’d love to hear your thoughts on the topic, as always comments are encouraged and welcomed.

About the Author
Rebecca Jacques, Founder and President of Inspired Hospitality Recruiting, is recognized as an entrepreneurial leader and high level professional in the hospitality industry. For more than twenty years she has been driving new business opportunities and securing top-caliber talent for leading Fortune 500 clients as well as mid-size public and private companies.
Social Share

Founder and President of Inspired Hospitality Recruiting, LLC. We specialize in recruiting for the hospitality industry.

Every year on 9/11, I take my neighbor Hector DeJesus and his wife Elsa DeJesus to speak to elementary and middle school children in two local counties here in Central Florida. This year, is a little different. We are logged on and making the rounds. #neverforget #wtc 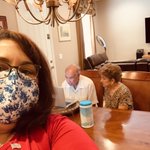 Today is #GlobalTADay! Helping my clients and candidates find that #rightfit is the best part of being in #talentacquisition. I'd love to hear about your best experience as a #hiringmanagers or your #candidateexperience today.

Excited about this new book I just ordered. The Standout Experience: How Students and Young Professionals Can Rise, Shine, and Impact When It Matters Most https://t.co/u8kNqtT12U

Feed has no items.